A good friend of mine recently moved to the Atlanta area and is experiencing a rare ice storm. She tells me that it’s raining ice and she’s amazed. She’s also trying to move her family to a new house. Something tells me she’s not happy.  The South has been hit with some really terrible weather – something we hardy Northerners endure and discuss over coffee year after year. I haven’t worn regular shoes for nearly three months now and suspect they are gathering cobwebs under my bed. Instead, I don my huge heavy boots every day and have given up any hopes of being fashionable – not that I ever have been.

As a kid, weather like we’ve had lately seemed to be a common occurrence.  Gathering snow drifts gave us all hope that school would be closed. We eagerly listened to the local radio station for such good news – and once we knew we were free for the day, our plans were set. It was a time without video games, computers and reality TV. Rather, it was a world full of the great outdoors. Snow castles, snow men, snow tunnels and glorious sledding!  Some of us had mothers who didn’t work outside the house, but for those that did, there were grandmothers, aunts and willing neighbors to keep kids in line when Mother Nature set us free.  Bundled up, often in our older siblings hand me downs, we’d set out for our winter adventures with the zeal and expectations of the hardiest polar explorer.  It was if some great force knew we needed a break, and we embraced it with abandon.  It was an unexpected holiday – designed just for children.

I still watch for school closings, and carefully watch the names that crawl across the bottom of the TV screen.  Seeing my town on the list still gives me a lift – and gives me a reason to linger a little longer over the newspaper.  A little bit of holiday perhaps?

Retired, I don’t have to brave the effects of what’s been called the Polar Vortex.  My hat and gloves off to the postal service, police department, city, county and state workers and our brave and hardy business owners. But special thanks to the bus drivers, teachers and school personnel who keep our schools open.  A snow day is tough for many families. The list of available grandparents, aunts and neighbors is small these days. Kids can’t stay home alone any longer. Many don’t have warm coats and boots, or a parent to take them sledding.  It’s a new world.  I fear that winter is no longer designed for children.

Attached is another of my gesso, messo canvas creations. I call it “Celebrate You” 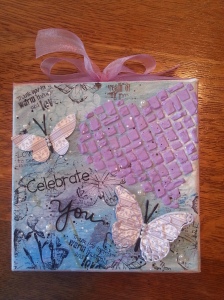